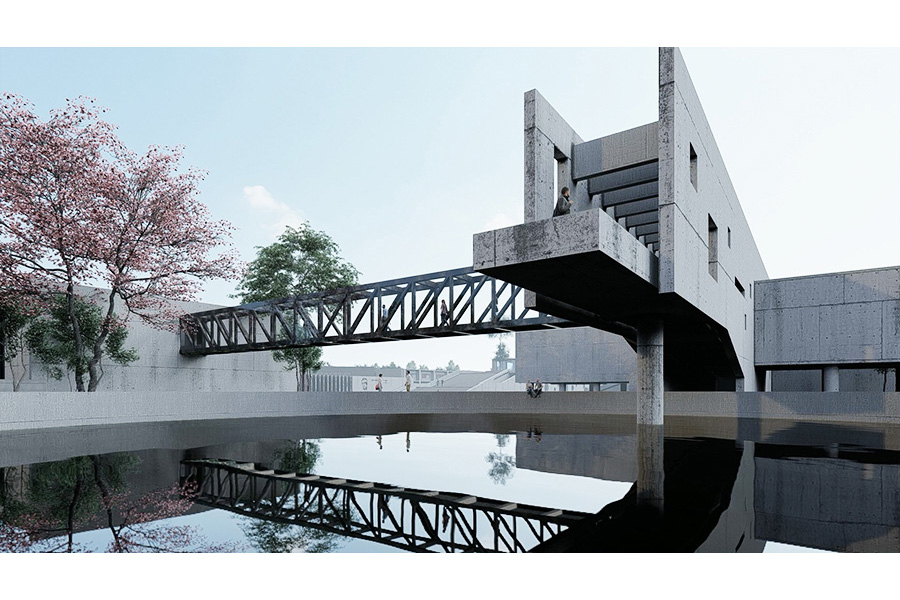 Architectural representation of a person’s philosophy, leadership, journey, and life is a challenging endeavor that often gets lost in the complex aspects of functionality, aesthetics, and zoning. Bongotaj Memorial and Museum Complex at Kapasia, Gazipur by Md. Shahadat Hossain attempts to negotiate with those challenges in its efforts to portray the inspirational life and journey of Tajuddin Ahmed, the Prime Minister of the Provisional Government of Bangladesh during the Liberation War in 1971. Tajuddin Ahmed’s greatest contributions were his leadership in the absence of Bangabandhu during the Liberation War and his critical role in obtaining international recognitions for the newly formed country. Perhaps the biggest challenge of the project was not just finding architectural expressions to celebrate Tajuddin’s life’s work but also creating a space or an experience for the visitors to remind them about the painful end of his journey when Tajudding, along with three other imprisoned leaders was killed inside the jail on November 3, 1975. In the carefully crafted masterplan of the project, a strong central axis represents the succinctness of Tajuddin’s personality and his bold, brave, and monodirectional approach to achieve Bangladesh’s political goals. However, the central axis is not just a formal expression, it also contains the journey for the visitors from the start to the end. Built forms and spaces along the axis represent the eventfulness of his life in four major periods of his political career. The death of Tajuddin is symbolized by space, forms, and artifacts in Gallery 05 called ‘Opurnota’ which means unfulfillment. Like Bangabandhu, Tajuddin Ahmed could not fulfill his responsibilities due to his untimely demise in the hands of the enemies of Bangladesh. While the museum complex glorifies Tajuddin’s life, it will also keep the visitors wondering how much more he could have contributed to the welfare of Bangladesh if allowed to live his full life.   -Editor

Text from the student:

The proposed memorial museum complex is a thesis project aiming to pay tribute to a great national leader Bongotaj Tajuddin Ahmad and his journey through the political history of Bangladesh. Bongotaj Tajuddin Ahmed is one of the most notable national leaders of Bangladesh who led many historical movements of the country. He was a constant companion in the political journey of our father of nation Bangabandhu Sheikh Mujibur Rahman and accompanied Bangabandhu from the frontline in almost every historical uprising leading to the birth of Bangladesh. His life’s greatest achievement was leading and organizing the 1971 Liberation Wartheabsence of Bangabandhu. The nine-month Bangladesh War of Independence witnessed his great leadership and vision. He united all political personalities and the people of Bangladesh and led the first Provisional Government of Bangladesh popularly known as the “Mujibnagar Government”. He played an important role incollecting supports for our liberation war.  Tajuddin Ahmed strongly handled all the conspiracies against the freedom of Bangladesh during the 1971 war. Unfortunately, he, along with many other notable leaders of the country fell victim to the enemies of the young nation after its liberation. Following the tragic assassination of Bangabandhu and his family members; Tajuddin along with three other imprisoned leaders was killed inside the jail by a group of army officers on August 22, 1975.

This project is located at Tajuddin Ahmed’s birthplace Kapasia, Gazipur. The site is a part of his home, with existing residential units, a school, a mosque, the school field, and a pond. Bongotaj Tajuddin’s life journey can be divided into four major periods –  the British Period, the Pakistan Period, the Liberation War period, and the Bangladesh Period. To my understanding, each of these four periods provided unique attributes, achievements, gains, and losses to his journey in politics.

I developed my design concept from inspirations found in Bongotaj Tajuddin Ahmed’s numerous speeches. My idea was to find him in his great works and his historical journey tothe glorious victory of Bangladesh and translate such inspirations into built forms. The title of the concept is ‘A Journey throught the Glorious Victory’. The following design-built expressions were incorporated into the design.

Tajuddin Ahmad was extremely focused and disciplined to reach the political goals of Bangladesh. So, I created a bold axis through the site representing his life’s journey and arranged some volumes of space along the axis to represent the eventfulness and milestones of the journey.

I created some green slopes to blend the built form with nature to represent the personality of Tajuddin Ahmad. From the entry of the site, people would see only green slops at the front and the axis at the back, and the green natural beauty of Shalban as a backdrop.

I created a continuous water body with five gallery spaces. Water is used to imitate the deltaic landscape of Bangladesh as well as a guiding element. Water channels and the sounds of water flow will guide the visitors to the end of the journey – a terminal place to evoke a sensual emptiness that would remind the absence of Tajuddin Ahmad.

We walk through his life’s timeline and at the end, we feel the deep sadness of losing him. When people will go to “Galley 05” they will witness the darkest history of our nation  the brutal murders of the leaders who led the people to find a new nation.

The “Hall of Remembrance” would embrace the historical ambiance of losses & sacrifice. A screen of life’s timeline of the political journey of Tajuddin Ahmed’s will be placed for the visitors in front of the “Hall of Remembrance”. Finally, a pathway with the existing residence and other structures would allow visitors to visit the historical residence of Tajuddin Ahmad where he was raised.

The proposed project would show our collective respect to this great leader and allow future leaders of our country to find inspiration from his life’s work, leadership philosophy, and journey.