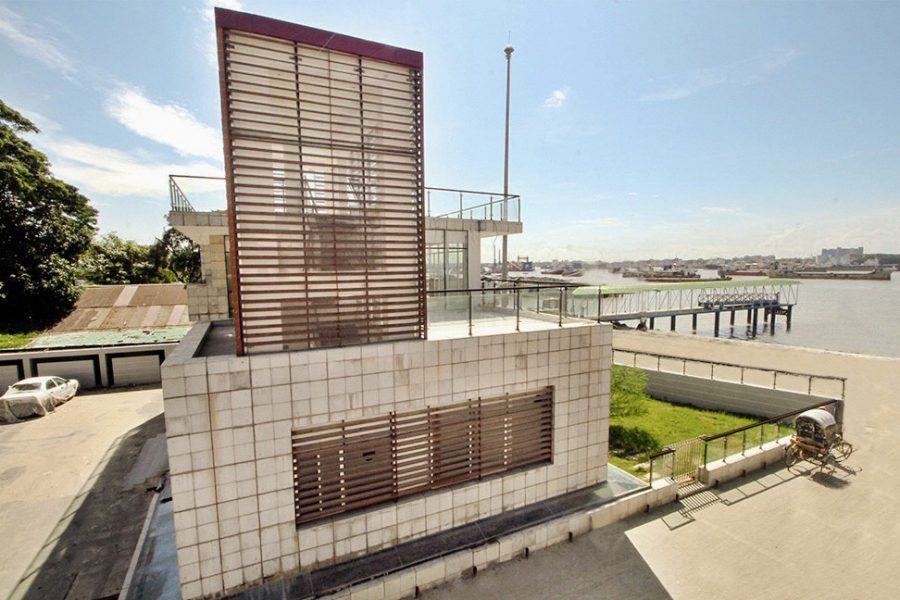 Location: Abhay Mitraghat, Sadarghat, Chattogram
Since 2019, the Chittagong Port Authority has been operating water bus services in Karnaphuli River to reduce the traffic congestion and sufferings of Chattogram city dwellers. Under this new plan, modern landing stations, pontoons and necessary infrastructure are being constructed to make water travel more popular among the commuters. The featured project is one of the terminal buildings designed by Vector Plinth.
Read More [+]

A Collection of Collages | Rashu 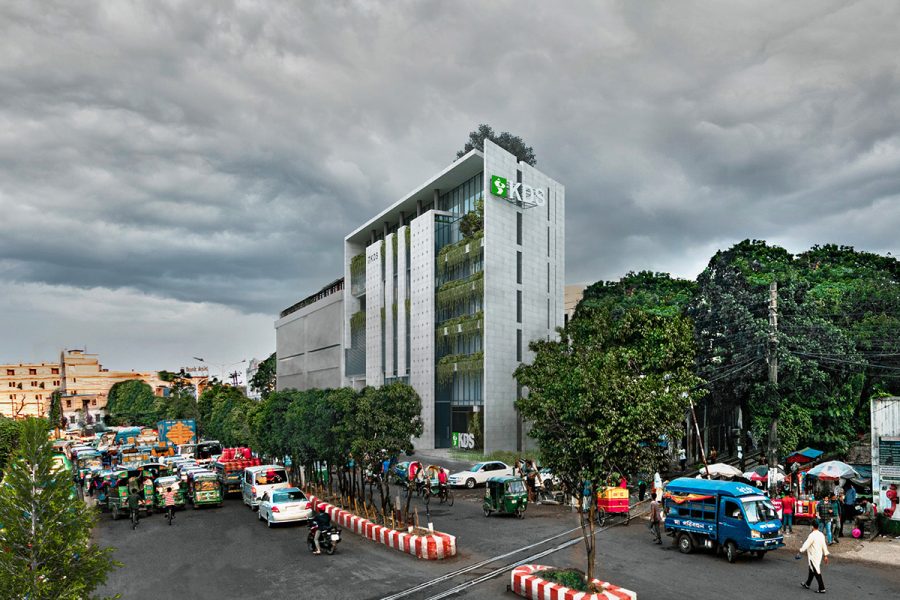 Name: Weavers' Studio
Year: 2019-2020 (construction ongoing)
Location: Nasirabad Industrial Area, Chattogram
The following proposal was created by “Weaver’s Studio” team, which has been nominated by KDS Group, a multinational industrial organization originating in Bangladesh, through an architectural design competition (2019). The client decided to build their head office adjacent to one of their RMG factories situated in the location.
Read More [+]

Nayantara Residence: A Home with a Heart

Name: Jishnu Kumar Das | Nirmanik Architects
Year: 2019-20
Location: Subidbazar, Sylhet, Bangladesh
What makes a house a home? - A rhetorical question that built environment professionals are often encountered with. Popular belief is that a home is a place where you feel warm and cozy. You have things around you that are special and have meaning, but most of all you are surrounded by people you love and who love you. It is, therefore, the family that makes a house a home by living in it and making it special. When it comes to design, it requires thoughtful reflection of complex cultural, social and psychological traits of the users. The featured project by architect Jishnu Kumar Das is an example of such inside-out approach of space design that puts a family at the heart of a home.
Read More [+] 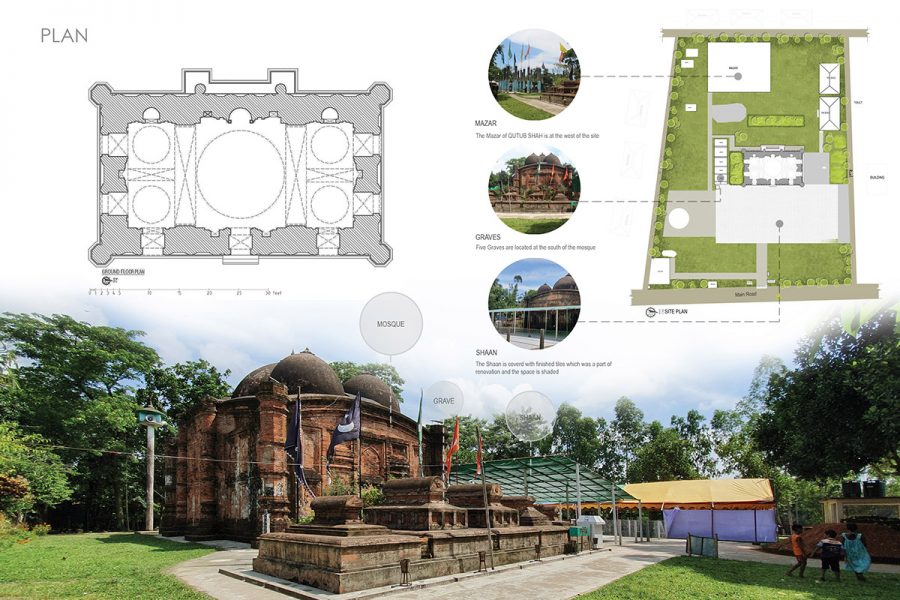 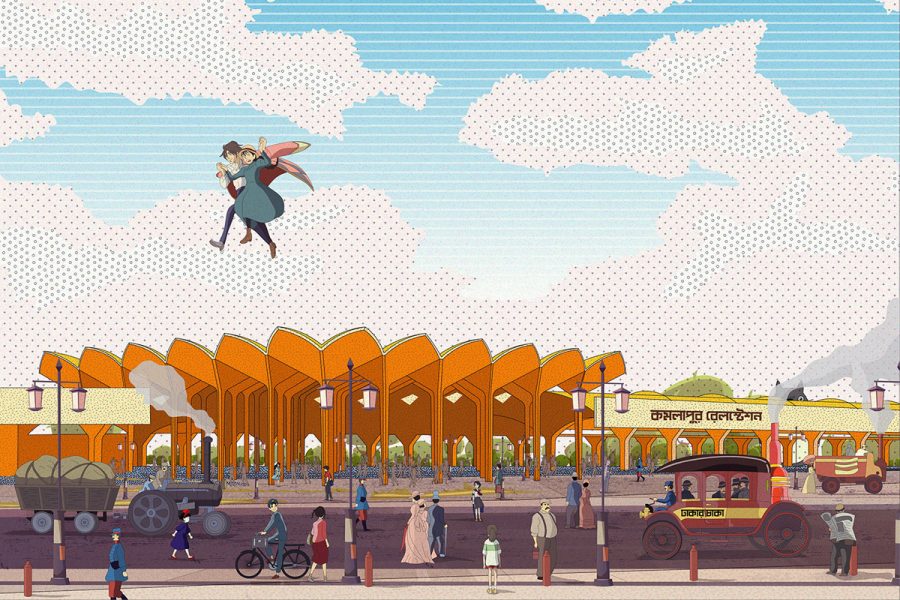 Name: Asad Hossen
Year: 2020-2021
Location: Dhaka
‘Dear Dhaka’ series by Architect Asad Hossen attempts to encapsulate the distinguished architectural history of Dhaka; with a pinch of magic and nostalgia. Remembering our past, these illustrations depict the heritages of Dhaka in its heyday treating each heritage as story-telling paradox unveiling untold stories of the past. The series makes effort to raise empathy and awareness for these heritages.
Read More [+] 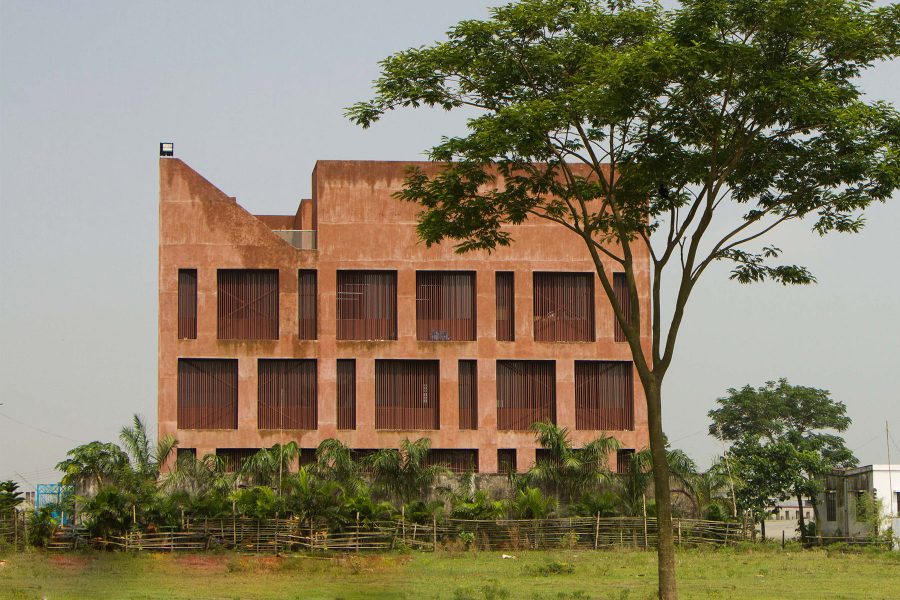 Name: Nabi Newaz Khan Shomin (Lead Architect) | Archeground Ltd.
Year: 2015
Location: Shatarkul, Merul Badda, Dhaka, Bangladesh
Archeground, one of the highly acclaimed design practices in the country, is producing innovative and functional architecture since its inception. The featured project is another example of Archeground’s inventive thinking which exhibits “delicate form of craftsmanship” in its use of finish materials. The monolithic exterior of this so-called ‘Red Building’ was the subject of experimentation for Archeground to explore and test a new alternative to traditional shell lime plaster. - Editor
Read More [+] 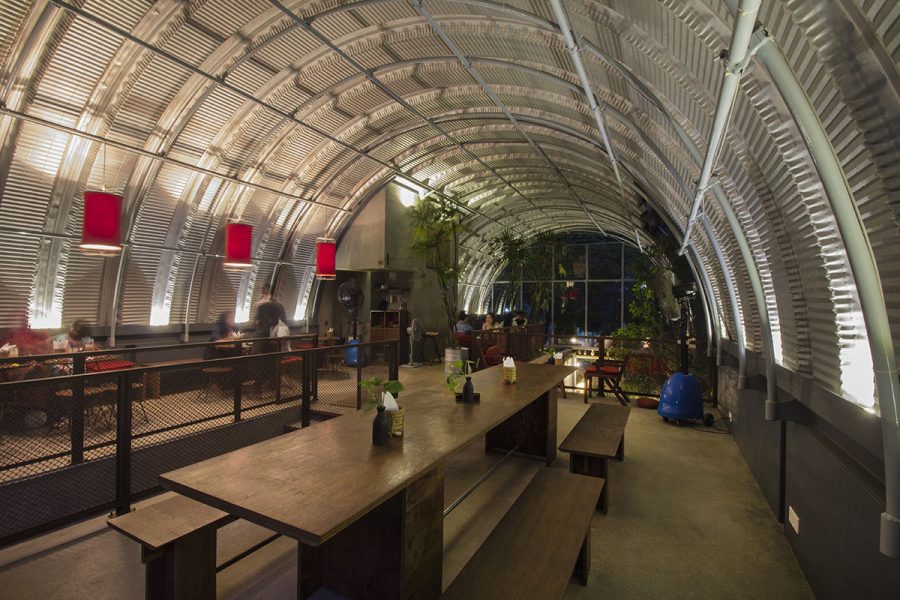 Name: Rashed H Choudhury, Sayedil Ashrafin, Emon Mahbub
Year: 2015-2017
Location: Road 2, Sector 13, Uttara, 1230 Dhaka, Bangladesh
Situated on a long, narrow plot in a residential neighbourhood, this award winning café features vertically layered yet singular space stands beneath an elegant vaulted ceiling. Beyond exposing the rich structural elements, the ceiling grants a natural and compelling contrast to the interior space. The juxtaposition of building materials and the greenery that surround them is endlessly fascinating and adds warmth to the interior.
Read More [+] 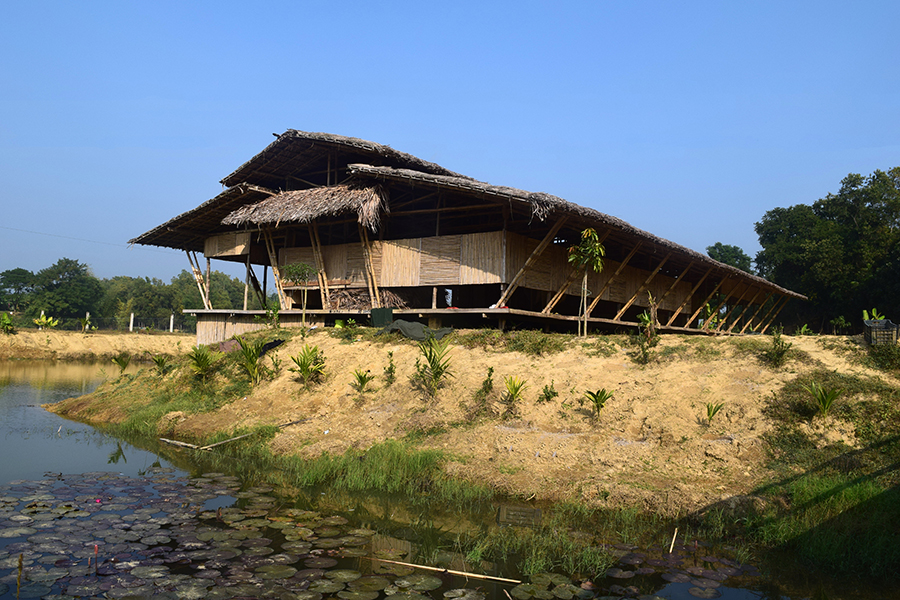 Name: AKM Saleh Ahmed Anik, Kanak Saha, Sayon Sur; Associates-Babu Singh, Hlatun Singh, Saiful Islam.
Year: 2019-20
Location: Baidyapara, Idgarh, RamuEidgaon, Cox Bazar
The school is a bamboo-built structure on a raised timber platform and closely geared to the site and surrounding views of water and farmlands. The work is strongly archetypal, with the rectilinear plan metaphorically centred on a ‘hearth’ in the foyer. In that sense, the constructions of ‘Indigeneity’ are both formal and spatial. The building constructs an ‘Indigenous’ space and imagery which connects with the local spirit. It is a site of cultural production, an archetypal quest for an architecture that is sensitive to the local context and indigenous building tradition. - Editor
Read More [+]

Through the Spirit of Time and Place

Name: Nishan Barua
Year: 2020
Location: Chattogram
Nishan Barua, an architecture graduate and self-taught artist, has a passion for arts. He has been practicing oil painting for more than seven years and is currently running a studio called ‘Studio Artestra’ - a painting and design studio collaborating art and architecture. Cityscape, urban and metro, natural elements are his sources of inspiration for abstract, abstract- impression and impression form in his artworks. His favorite media is oil on canvas. Rough brush strokes and textures of palette knives are prevailing on his paintings.
Read More [+] 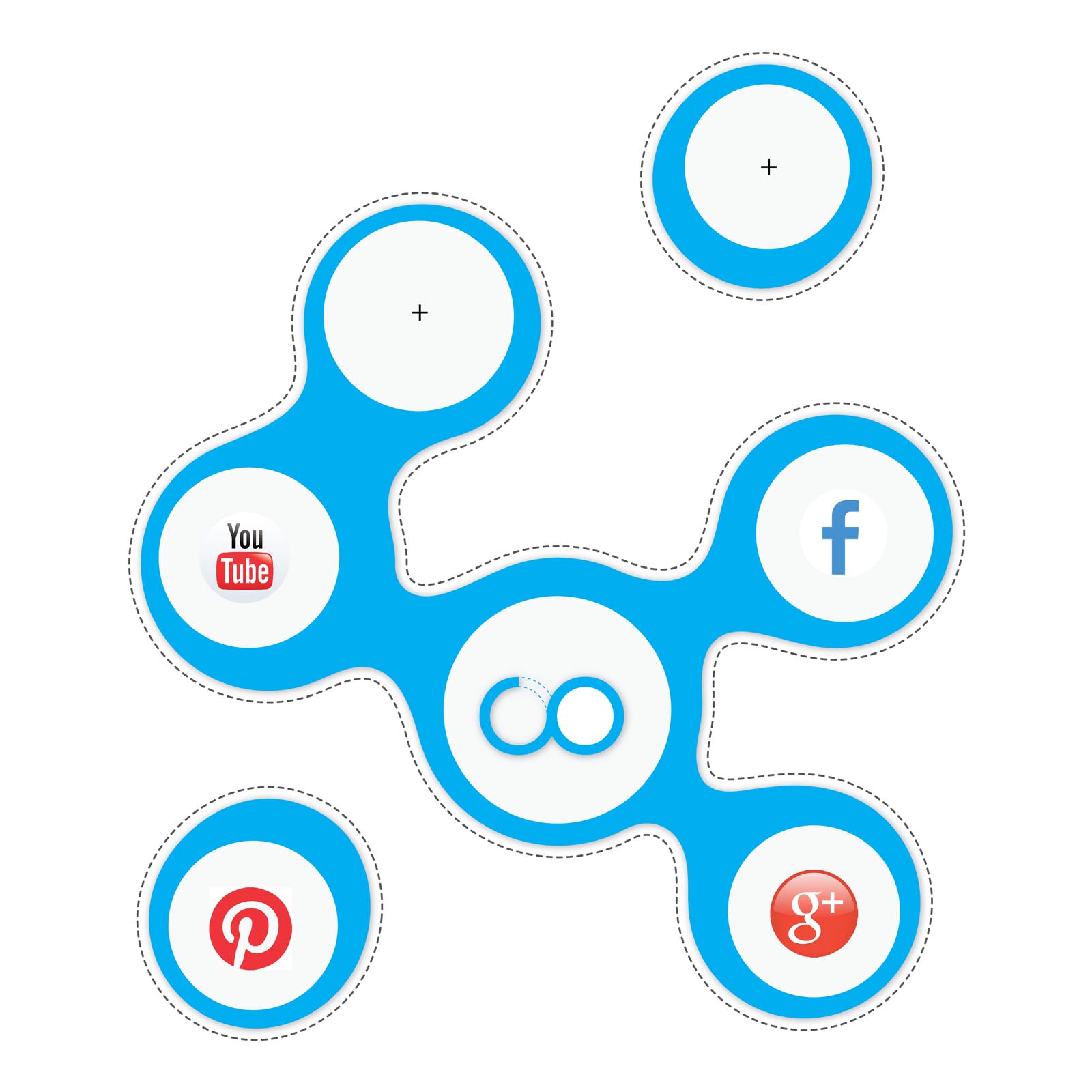 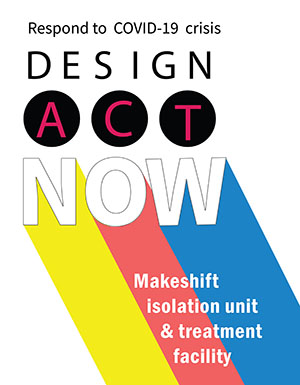